It is my great fortune to be able to share with you the 'Red Dragons' collection and force for use in Patrol Angis which belongs to long term IonFan Mr Mark Burgess.  A mercenary formation of infantry, heavy infantry, bikes, battlesuits and vehicles of some four Lances (or platoons).  Here follows a short account of the Red Dragons as well as a link to download their pre-filled rosters for use in the game and also some really nice images of the collection too.  Enjoy and thank you Mark! GBS 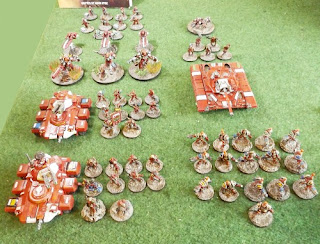 When Baron Bradshaw Reff rebelled against King Cyon III and the Council of Addans in 4302 IC, Baron Culhwch of Caledfwlch answered the call to arms from the King.  Personally leading the bulk of his army, comprising of both Retained and Muster, he left his home world in the care of his brother Bedwyr.

Culhwch and Bedwyr had never been close. While Culhwch was a natural leader Bedwyr was selfish and cruel; this often caused tension and fighting between them as they grew up. When their father died he granted them joint rule over Caledfwlch in an attempt to bring them together. This however ultimately had the opposite effect. Resentment had been gnawing at Bedwyr's heart he thought himself the only rightful ruler of Caledfwlch and no longer would he share with his brother.

When Baron Culhwch returned home after the death of the King he found much had changed in the years he had been away.  Bedwyr had raised his own army and bolstered the fortifications around the planet. As his fleet approached Caledfwlch, without warning, the orbital defences opened fire. Unprepared his fleet lost three frigates before they could raise their own defences with many other ships in his fleet badly damaged as well.  After the initial shock of the assault abated, Culhwch, normally a quiet and reserved leader flew into a wild rage. He vowed to crush his brother and all who served him, for this betrayal. Once awoken the fire-power of his remaining fleet made short work of the orbital defences. Then he unleashed all of his forces to the ground assault of the capitol. He was taking the battle straight to his brother.

The battle was short and bloody with campaign veterans against Bedwyr's untried Planetary Militia and Muster. Such was the rage of Culhwch and his forces that the Code Gallant was all but forgotten. A grievous crime indeed. Baron Culhwch who personally led a lance, breached Bedwyr's castle defences, cutting down retreating Muster on his rush to face his brother.  Bedwyr was found cowering in the reception hall his bodyguards having deserted him. Without a word or a warning the act was carried out. Culhwch strode up to him and cut his head from his body. He then looked around shocked at what he had done, his armour, once yellow, was now red with the blood of his kinsmen. Turning in silence he walked away.

Ashamed at the destruction that he and his brother had caused his homeworld Culhwch left the planet vowing never to step foot there again.  He took his forces to a small mining planetoid off Khartuum which his family had owned and settled there. Renaming his company The Red Dragons after the flying beasts on Khartuum and repainting their armour red as a reminder of the day they broke the Code Gallant, they now hire themselves out as a Condot. 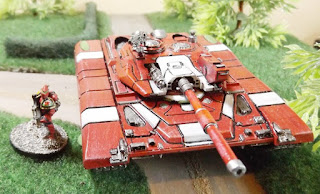 If you would like to download the rosters for Patrol Angis for this Condot Company you can do so from our dropbox on this link HERE.

Here are pictures of the Red Dragons force in the elements it appears in the rosters.  Click on them to make the images larger.  I have added a comment to each photo.

Thank you for reading and I hope you enjoyed what was shared here.  You can see more of Mark's miniature adventurers on his BLOG.