Condot of the Red Hand Mercenaries by Christian Cuello

It is my pleasure to present an article set in The Ion Age by Christian Cuello all about his Red Hand Mercenaries that make use of the special Rewards Points reward Commander Murdo Taranis Tank (read about that HERE) or see our range of super heavy 15mm tanks HERE.  Enjoy the article and well done Christian!  GBS

Condot of the Red Hand Mercenaries

Villains. Pirates. Scum. Mercenaries - in every sense of the word. The worst of the opportunistic guns for hire of the Prydian precinct can be found in the ranks of the Red Hand, a mercenary condot under the leadership of the self-appointed Count Roderic of Ispalia XII, one moon of the many planetoids condemned to oblivion by the Civil War that continues to tear the galaxy apart. Now almost totally uninhabitable, the husk of this devastated home-world lives on only as a fragment occupied by the fortress city that provides safe haven for those escaping Prydian authority.

Simply put, the ranks of the Red Hand are filled by criminals, the appellation earned by their inconspicuous attire and reputation. And for this reason there is no shortage of opportunity for employment. A constant stream of envoys vies for the services that the Red Hand provides: perhaps an ambitious Baron seeing to expand their rule, or a usurper seeking to surreptitiously obtain a measure of power for themselves, or a merchant seeking protection while undertaking dubious transactions on the fringes of inhabited space. And yet, even the most powerful warlords of the galaxy may be surprised to find themselves looking down the barrel of a laser rifle held by a blood-red gauntlet, betrayed at the last moment by a mere matter of credits.

As long as there is conflict in the universe, there will be individuals like Count Roderic who seek to profit from the discord. And should peace be realised, it would be short-lived. For there is no shortage of antagonists - human or otherwise - in this theatre of war.

My forays into the world of the Ion Age is by way of my mercenary force, the Red Hand. It has been an enjoyable experience, and after a bit of muddling about in the early stages (as with any game) it was very easy to get into. Everything is just too good not to paint and play with! The rules lend themselves to creative and scenario driven force composition so I’ve literally picked out the figures that I just thought looked “coolest”. You may recall this post on the Ion Age BLOG a little while ago.

Keeping the paint scheme relatively simple I’ve been able to churn out something close to a mixed infantry and vehicle platoon in game terms. I will probably go into more detail about the platoon in another write-up but I couldn’t pass up an opportunity to get stuck into the Taranis. The king of the battlefield in the Ion Age, I was fortunate enough to receive the special variant available through the reward scheme through the Ion Age store. I can tell you now it was surprisingly easy to work up the points!

The Commander Murdo special variant of the Taranis has two mighty hi-explosive Ron cannons, a rotary Moth 88, and a pintle-mounted machine gun. For the uninitiated: it’s a beast.

I’d had the model for some time before working myself up to building and painting it, and I wish I’d had it done sooner. The tank comes in six pieces which may require a bit of tidying up. Fortunately the resin it is made from is high quality and is very responsive to cutting, shaving and sanding, so it shouldn’t be a problem for a slightly more than beginner level modeller. Here it is in pieces just after tidying up and before putting it together: 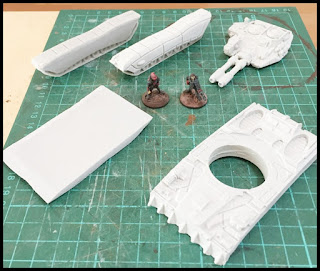 And here it is before a base coat. You’ll notice some space between the tracked sponson and hull. This was fixed with a very small amount of wood putty which sanded down and blends right in to the rest of the model. Here you can see it with a black undercoat: 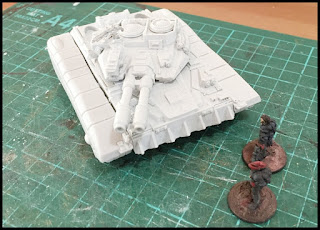 And here are some progress shots:

At this point I’ve left the tank at a “showroom” condition paint job, but really do want to try my hand at some weathering. I’ve kept the paint scheme relatively simple but it really is a blank canvas for all sorts of camo, battle-damage, and squad markings. 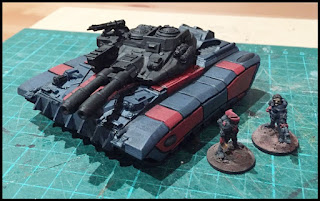 This was a great kit to put together and I’m really looking forward to fielding this in our games.

As the harsh Sun beats down on the surface of Mars (or a planet very like it...since Mars is deep within the heart of the dreaded Imperial Commonweath), final diagnostics on the Taranis are carried out…