The Ion Age makes all of its releases for the month with the first two 15mm scale Shia Khan Empire armoured vehicles for you to use with IAB03 The Khanate Return in your games of Patrol Angis. Place your order and get your Pugnus Light Tank and or your Manus APC both alien and superbly different styled resin and white metal wheeled vehicles.  Every order gets Reward Points on your account and you get IMP46 Female Retained Knight Errant (worth 1.00GBP) free included and remember we have 25% off the IAF057 Knight Errants of Prydia character pack this month.  Read on for more or head for the website HERE now. 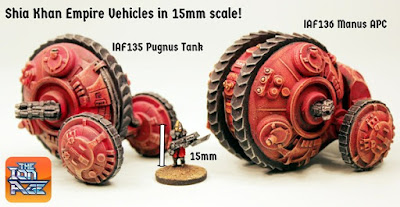 “The last town in the Glover Agri Zone was taken by four lances of the 23rd Regiment who came up against something not yet seen. Armoured vehicles designated Pugnus type light tanks.  One of these alien creations was blown apart by rounds from a Bodkin Type 6 rifle, its 28mm explosive penetrator shells punching through the deep red armour of the tank.  Another killed half a lance of Knights with its triple Jupiter 46mm plasma mounts before it was stopped.  With a  Pugnus destroyed, the only other aliens to be found were three short and stout power armoured Legionaries who appeared to be engineers of some kind.  Despite best efforts none of the three were taken alive instead they chose to open fire with Maia 9.6mm Mpi. It took only a day for the agriculture zone to be back in the hands of Humanity.  It was a fine beginning.  Food and more would now flow from the zone to the army and civilians had been saved and a new chapter for the Sigil was begun.  Glover would be a place from which to meet the aliens and drive on further.  The 23rd Regiment of Prydia was joined by the 207th Muster Regiment and armoured platoons from the 96th Regiment.  A combined arms force of nearly ten thousand troops which was going to set out from Glover to meet the Shia Khan Legion which was advancing north from the Chivers Zone.

The enemy force had been designated the Styx Legion in the established manner of fighting the oldest foe of mankind.  With purpose in their hearts the Knights and their Muster of the Prydian Army boarded their transport vehicles and their repulsar platforms and struck forth into the next battle.” - From The Khanate Return. 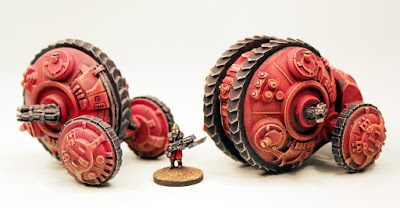 There are many images from all angles along with comparison scale shots and parts pictures all on the web page for each vehicle and they are too many to show here.  Please continue through to see them all. 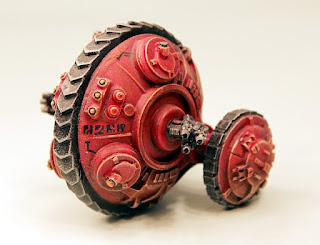 IAF136 Pugnus Light Tank
The primary armoured vehicle of the Camarthen system in service of the Legions is a modular wheeled hull which is adapted to different uses. The most common of these the Pugnus is a light tank which has two side pods, each mounting twin Juno Lasers or Jupiter Plasma Cannons giving it the ability to support infantry and to take on enemy vehicles of light to medium types.  It is deployed in threes alongside Legion Tesserans which lack mobility and heavier firepower. The Pugnus is about 50mm tall and 50mm wide when it is assembled. This pack contains the following 15mm scale resin and white metal parts which can be seen in the mono image on the page: A centre hull, a right hull, a left hull, two Wheels and two Triple Jupiter Plasma Weapon mounts. This kit is easy to assemble. 7.00GBP Go HERE. 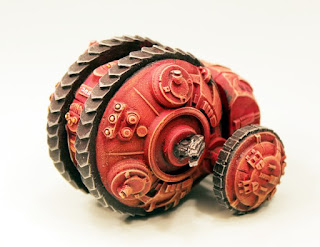 IAF137 Manus Armoured Personnel Carrier (APC)
The primary armoured vehicle of the Camarthen system in service of the Legions is a modular wheeled hull which is adapted to different uses. Adapted for use as a personnel carrier the Manus variant can take two entire Tesserans of Legionaries to where they wish to go and support them while there. Carrying them within its central wheels in stabilised comfort. The Manus is about 50mm tall and 65mm wide when it is assembled. This pack contains the following 15mm scale resin and white metal parts which can be seen in the mono image on the page: A centre hull, a right hull, a left hull, two Wheels, a 'rear end' personnel carrier assembly of four pieces and two Twin Juno Laser Weapon mounts. This kit is easy to assemble.  10.00GBP Go HERE. 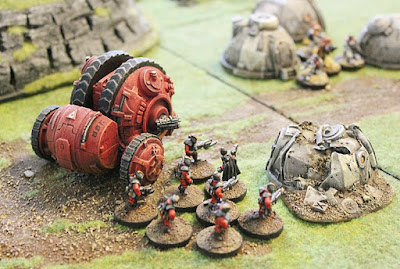 Later this month the scenario for Patrol Angis set in the second Camarthen campaign called 'Once more to Grapple' will be published for free on The Ion Age Blog.  This scenario makes use of all three titles in the series and sees the Prydian Army take on the Khanate including Pugnus and Manus vehicles as well as this month's free miniature as a character called Briona Sullivan of the Barony of Messena.  It is a large scenario and is being play tested now.  You can see a picture (one of many which will be included) above.  The scenario picks up where the story in The Khanate Return left off in the Glover Agri Zone where Baron Heraldus Falkner has been given the task of taking the zone back from the aliens.  A veteran of two campaign including against the Gryre the Baron is aided by nobles and errants who have pledged themselves to the quest of Camarthen.

For more on the free miniature for the month and for our offer this month and our Reward Points system please refer to this post on our blog HERE. 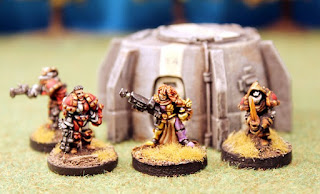 Enjoy these fantastic new alien vehicles and there are more to follow along with a big expansion of the Shia Khan Empire's troops as well.  All in 2017.