The Anda turret rotated smoothly and then paused before making a correction to its facing.  Two 60mm guided missiles streaked away from its housings into the pale green sky.  With a roar the missiles streaked off towards a blood red Skylark hovering in the distance.  The patrol flyer belonged to the Vangelias Condot Company and the hired troops had been threatening the small settlement of Drovers Edge since the day before.  Prydian Army formations on planet were stretched thin against three Condot company's and the normal ranks of the Yordan League.  It only took seconds for the projectiles to cover the distance from the platform mounted turret to the  Skylark and through the 'lark threw out countermeasures and gunned its four engines wildly to evade they had come too close in their eagerness.

Captain Frederick Wildermann of the 104th Prydian Regiment had his head out of the landing pad's access hatch and a viewer held up to his eyes.  He smiled as one of the 60mm missiles detonated against the hull of the enemy Skylark.  The other missile had missed and flew on into the distance.  With smoke pouring from its smashed hull the flyer wobbled and then turned tail and limped away.  Pieces of its titanium body were falling to the dry grass below and fluids fell like rain.  In his ear the captain heard the tower's commander asked for permission to loose again.  He ordered a cease fire knowing that the Vangelias 'lark would be lucky to make it back to base and besides he had only eight missiles left and little chance of more coming in a re-supply.  He would keep his armour cracking fists intact for the moment.

Wildermann stepped down the ladder and pulled the hatch closed.  There wasn't much room inside the landing platform's body but he preferred it to the rigid tents that his troops were encamped in around the three towers and several domes of Drovers Edge.  There was a narrow bunk and an impressive comms suite along with the hydraulics that cushioned the impact of landing vehicles stopping them harming the towers structure.  He wiggled into the bunk and lay down intent on a quick nap but the captain knew the lay of the land and kept the key coded channels of his helm open.  The condots would be back soon enough. 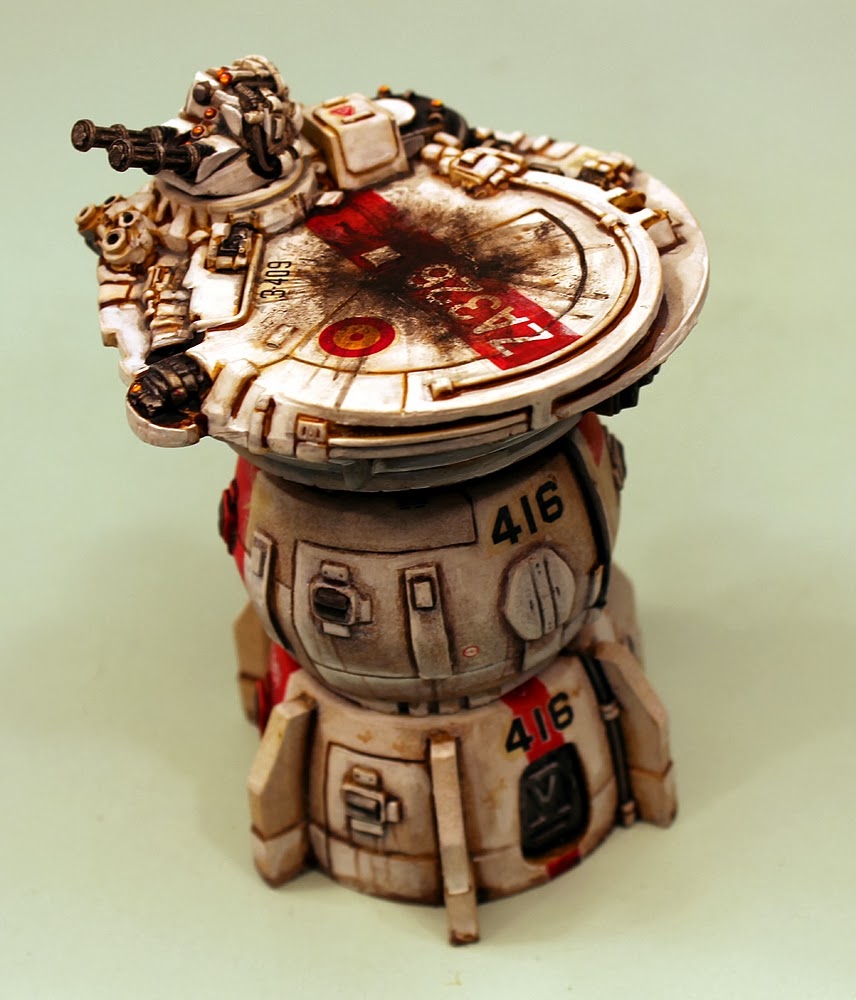 IAF015E Landing Platform
Our largest resin item designed thus far for The Ion Age supplied in two pieces of grey tone resin.  The lower portion of the platform which acts as a support for the upper platform and features a universal ring mount to attach to IAF015 Hab Dome or Tower Module.  The upper portion is a highly detailed area for light air vehicles to land and features a blank mounting for a top mount turret.  Total width 75mm and depth 20mm. You can also leave the lower portion separate if you wish to use the platform upper on its own at ground level or use the lower portion as a blank top for your Hab Dome in a use of your own creation.  This is a superb resin model.  Have a look at the concept blog post we did on it a month ago. 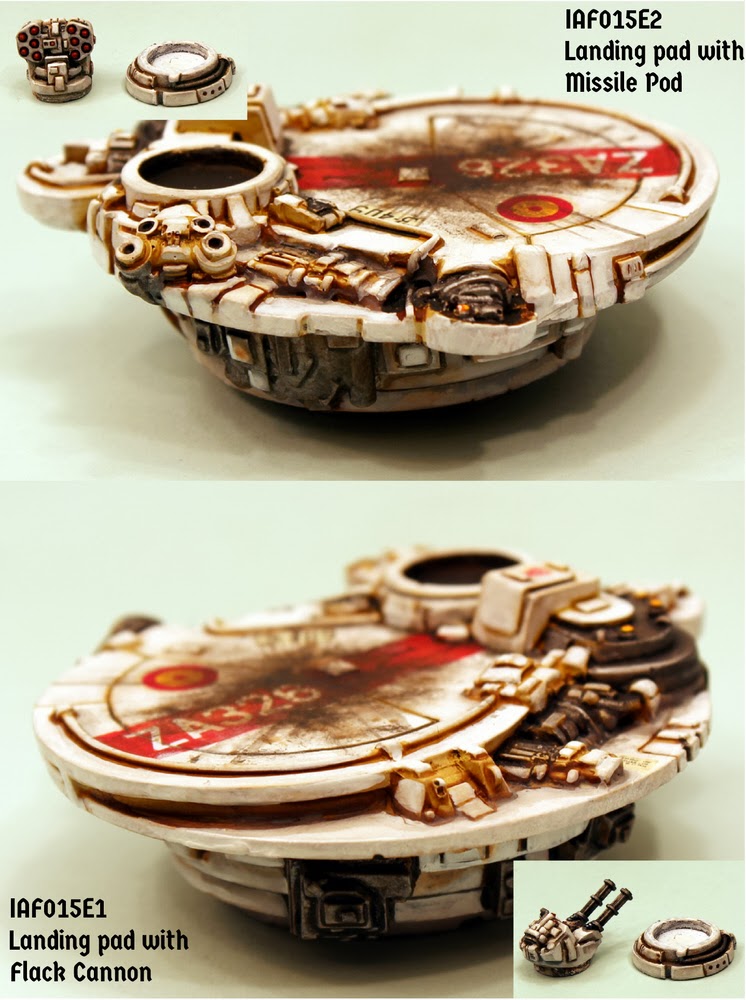 There are three choices for purchase and those are IAF015E Landing Pad kit only, IAF015E1 Landing Pad kit with Flak Cannon and IAF015E2 Landing Pad with Missile Pod.  You can also choose on these options to 'buy three save 10%' as normal.  Prices range from 7.00GBP to 9.00GBP depending on your choice.  Go HERE. 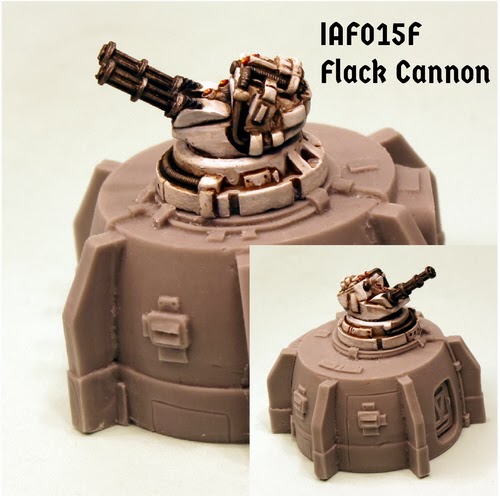 IAF015F Flak Cannon
A twin barrelled rotary cannon anti-air weapon made of grey tone resin and white metal. Supplied in four pieces including a separate turret ring for fitting to the Landing Platform or larger mounts or without for use on IAF015 Hab Dome or Tower Module.  You can choose to buy three and save 10%.  The Price is 3.00GBP. Go HERE.  This new top mount works well with IAF015A,B,C as well as they have the same fittings. 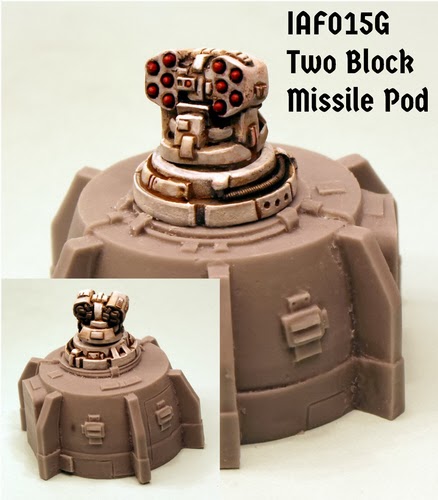 IAF015G Missile Pod
A two block missile pod for anti-ground or anti-air use. Supplied in two pieces of grey tone resin including a separate turret ring for fitting to the Landing Plaform or larger mounts or without for use on IAF015 Hab Dome or Tower Module. You can choose to buy three and save 10%.  The Price is 3.00GBP. Go HERE. This new top mount works well with IAF015A,B,C as well as they have the same fittings.

Information Burst!
We are now into the Skylark Patrol Flyer bundle offers period which lasts until 20th March 2014.  We would like to thank everyone who has taken advantage of the 25% saving on the bundles thus far and we hope that more of you will get in on the action.  Every bundle and every order placed gets this month's free miniature IMP07 Female Muster Patrol Officer (odd that eh!) which you can also purchase if you want more castings of it.  Come 1st April the current IMP miniature vanishes.  The release of the Landing Pad and new Turrets means a lot more options for your Ion Age terrain collection and we look forward to seeing your painted versions so send in your pictures.

We will be having our first special convention offer to tie in with our appearance on Alternative Armies trade stand at Salute 2014 in London more on that once the Skylark promotion is over.  By placing an order with us you will sign up for an account with the website and that means you get Reward Points in all purchases. These points can be used any time to get free products and discounts on orders.