“The largest walkers in the Prydian Precinct the Magogs are a class of war machine which tower over all others.  Piloted by a pair of veteran crew each Magog carries the mightiest weapons into battle and is the equal to the finest of other armoured vehicles. They are giant knights.  They are the mecha of the Marcher Barons and among them the Targa Works type 50 variants rule supreme.  Magogs are giants of legend given titanium alloy form in the war against the Khanate.” 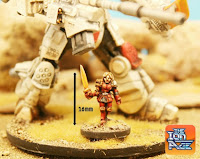 The ground is shaking!  Next week our little Ion Age will be full releasing the largest models we have ever made!  Three 'Magogs' our word in the setting of the far future Prydian Precinct for 'Mecha'; for walking giant machines with pilots.  In 15mm scale and sculpted by Sam Croes these models will come as easy to assemble kits.  Easy to build and to use in play in Patrol Angis or any other game system since we make gaming miniatures not fine scale models; they are durable.

There are THREE Magogs coming!  Three new codes plus a special 'mecha builder' code which will allow you to choose your own assembly of Magog (centred around weapon load out choosing legs and head types).  Full details at the time but in essence around seven to nine pieces in high quality grey tone resin which when build will stand some 80mm tall (about 26 foot or just under 8 metres in the real world).  As you can see from this teaser image they will be imposing.  Taken from IAF017 Ellen and Ripley pack the shown female knight is 16mm tall.  Here is the image full size (on the blog click on this to make it larger). 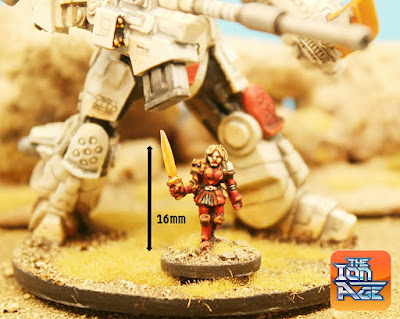 So what will be happening next week?

Before the full release notice of the Magog War Mecha (named Arcus, Blaes and Lann) on the 15th November we have entered our Black Friday Event which features these new releases and also free worldwide shipping on the entire website.  Free shipping on orders over 15GBP (meaning Magogs are free post!) as well as early supports on the Magogs which will have 10% off each single mecha and 20% off a bundle of three (the same or one of each) plus every Magog ordered during the event will get for free a pack of Taranis Runner Drones worth 5.00GBP included free.  Plus you will earn and can use your Reward Points on top of these offers.  Superb!  Go HERE for this.

During the Black Friday event we will have free resources for you as well before ending with a super Cyber Monday offer.  This will include additional special rules for the Shia Khan Empire in an article by Aris and a scale shots plus kit pictures of the Magogs as well as an article for using Magogs in your games of Patrol Angis.  We end the event with Cyber Monday when we will take 20% off all our digital books and that is 20% more off than the twenty percent already cheaper than the book in print.

Get ready for the big event of the autumn, watch out for giant footsteps and thank you all for supporting our team.