The Medusa Legion of the Khanate by Aris Kolehmainen

“It is the Legion that is the standard fighting formation of the Khanate Empire. Humanity has little knowledge of the languages used by the races of the Khan and has assigned the term ‘Legion’ to the enemy. There are a great many different Legions and each is given a different name typically from ancient mythology such as the Styx, Medusa, Priam, Venom, Scylla and Cyclopes Legions. This is down to the basic lack of identification than Prydian troops have with this alien enemy but it works well. Different uniforms and colours on roughly standardised armour and weapons mark out Legions. Some Legions like the infamous Styx have multiple sub-legions within themselves while others seem to be one force only. All Legions seem to number around five to six thousand alien troops along with supporting vehicles regardless of being a single or sub-legion.

Legionaries are the centre of all thus far encountered Legions and these tall and graceful alien soldiers can also be classed as more heavily armoured Pioneers who undertake close in combat. It is surmised that the ultimate embodiment of a Legionary is a Nox powered armoured soldier though these are present in lesser numbers. There are many other ‘client’ or slave races arranged around the core of each Legion including Maligs, Warlords, Psycoborgs, Beotans, Pertinax and Saurad. This seems dependant upon the environment being fought over with urban environments featuring more Maligs and Psycoborgs for instance. It is important to state that Maligs seem to be herded but not attached directly to a Legion and can number many additional thousands.”  - Extract from IAB03 The Khanate Returns. 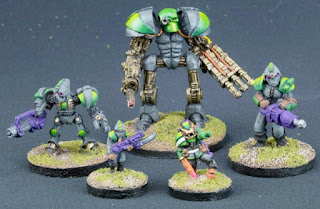 It is my great pleasure to present these images from the 15mm Ion Age collection of long time Patrol Angis player Aris Kolehmainen.  The Legionaries and others of the fabled and feared Medusa Legion.  While our own official uniform for all Shia Khan codes is that of the Styx Legion in red and black that was not what Aris desired and instead inspired by The Khanate Returns book where the Empire is details for play in Patrol Angis sought out the colours of another legion; the Medusa Legion.  Grey, Light Green and Purples make up the Medusa Legion uniform.

The Medusa Legion is not the largest of the Khanate formations which came through the Matter Gateway on Camarthen Prime but it is one with a reputation.  Specialising in urban warfare the legionaries of the Medusa freeze up whole zones of meta city sprawl with assault tesserans of Pioneers and of suicidal client races.  They also make great use of Psycoborgs and other automated troops which patrol deep into abandoned blocks and boulevards seeking out residual fire-teams of Planetary Militia or Muster.  A more exotic unit fielded in urban areas instead of Pugnus and Sphera rolling armour are modified and enlarged Psycoborgs which are a match for the Afara Striders of the Prydian Army. 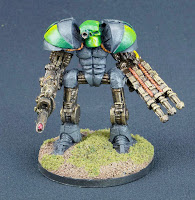 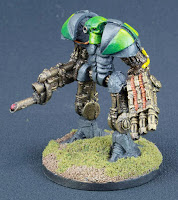 I have put links to codes in the pictures after each photo but a special mention of these larger automated units.  These are found in the HOF 15mm Science Fiction Range at Alternative Armies as HOF16 and HOF17 Giant Mechanoids.  I have added them to the Resource Wars page of The Ion Age website and they are in stock alongside the other HOF codes we have such as Charger APC's and Maginot Gun Turret plus Sandworms.  An interesting side note for those who have been with Alternative Armies for a long time the Giant Mechanoids are actually the original Psychoborgs from the 28mm Firefight range of the early 1990's.  Full circle!

If you fancy getting into Patrol Angis which is our 15mm scale fast paced skirmish system you can do so HERE.  We have a starter game pack which contains the core book plus a lot of miniatures and bases with a saving.  We have three books in print or as digital downloads and they can be had as saver bundles as well. 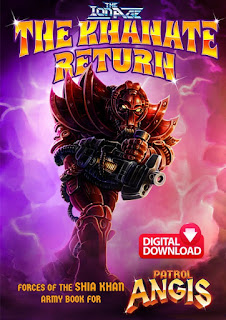 My thanks for Aris for supplying the pictures of his collection to use.