Welcoming 2018 with a free Duxis Battlesuit in every order!

The year is ending and it has been a bright one for The Ion Age.  Thank you to all our customers for continuing to grow our Space Opera wargaming dream throughout 2017.  To usher in the new annum we have an offer now on.  We will put one random IAF030 Duxis Battlesuit worth 5.00GBP from the eight variants into every order placed for free.  A customer may place as many orders as they wish and we will put one for free in each of them.  You also get your Reward Points on your orders as normal and you may use your accumulated points upon your orders in this period and you will still get the free Duxis Battlesuit.  We are giving you a little something as a thank you.  The offer ends midnight GMT 2nd January 2018.  You need do nothing but place your orders. Go HERE and browse. Perhaps some new Beotan Werewolves or a Tohlic Armoured Crawler or a Patrol Angis game pack? 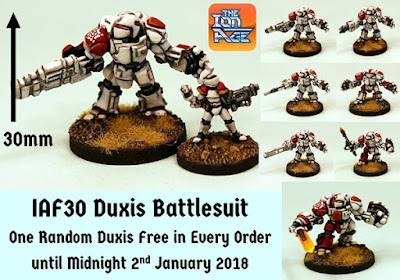 We have many thing miniatures made as well as new vehicles which will begin releasing in January 2018 with something really fun for the Shia Khan Empire.  That is to come and for the moment let me show you a little more about one of our favourite models which is now in new molds as of early December.  The 'Royal Gift' otherwise known as the ultimate in personal single armour the Duxis Battlesuit is a prize possession for nobles, barons and veteran knights across the Prydian Precinct.  It has three melee orientated variants and five ranged variants.  See them all HERE.

Princess Cyon knows a lot of things.  I mean a lot.  It was lot before the Reord bonding and though it's even more now I can tell you that she came up with the Duxis MkI on her own.  Technics, Fabrication and Structure too.  All of it her idea.  To make her point she wore the prototype upon entering the Adden chambers and it made her point just beautifully to the Council.  We knew the Khanate had returned and we had the reports of the first contacts from Camarthen Prime but the Princess, she had her father's knowledge of the times of the first Khanate War.  We confirmed it later but in those chambers and on that day Princess Cyon said one word as she strode towards us footfalls heavy.  Encased in armour and over twelve feet tall she said 'Warlord' and then activated the holo emitters attached to the prototype's shell.  I think there was not a knight or baron in the place who did not shrink a little in their seats.  Out of thin air a monster appeared.  Like a Man in shape but larger; far larger.  She drew an energised blade longer than a Starvaulter is tall and conducted a mock melee with the projection...and she won.  Hours of discourse followed and all the while Daphne Cyon stood in her prototype Duxis Battlesuit and held sway.  The Warlords were more than a Retained Knight could cope with so make a Retained Knight more than they already were.  We did.  Now in Camarthen space we meet those hulking monsters with metal of our own.  Its a close fight but now its a fight we can and we will win!
Knight General Obermann.  Fleet Command.  4331 IC 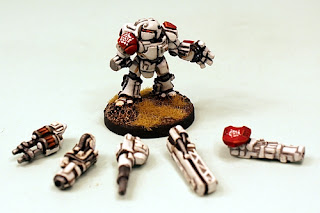 MkIII Duxis Battlesuit
The Duxis Battlesuit known to some as the 'Royal Gift'. IAF030 can be given a number of roles from a knight to melee specialist to ranged purposes in play and stands 30mm tall. Cast in white metal in 15mm scale it requires assembly and has a good degree of pose choices through its variants.  Composed of an upper body, lower body, head and then a choice of weapons and arms (gauntlets) from eight variants the Duxis is a versatile machine. Chose body angle, choose head angle and direction, choose arms and weapons.  It can be posed many different ways. 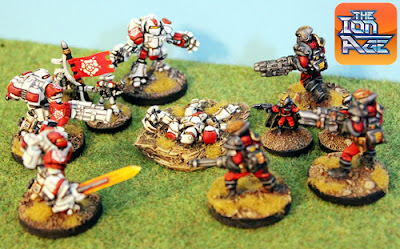 Here are the types of Duxis Battlesuit which match up to the lettered variants:

As we say here in Scotland for the new year...Happy Hogmanay and may next twelve months bring you fortune, good luck and many gifts beginning with this free battlesuit!

Email ThisBlogThis!Share to TwitterShare to FacebookShare to Pinterest
Labels: Announcement