The Great Space Opera Blog campaigns in The Ion Age

With the festive season upon us and the snow falling it gives me great pleasure to present this short article on a brand new blog which is all about a new campaign set in the universe of The Ion Age. Rhys contacted me a couple of weeks ago and told me of his new campaign which is being played out on his The Great Space Opera Blog part by part. It has not taken long for Rhys to become fascinated with the Prydian Precinct and the civil war which has torn it apart and I have greatly enjoyed reading his plans and his reviews too. Go HERE for the blog or read on for more about what has occurred thus far. 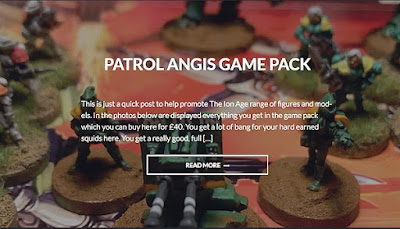 Beginning with an outline of the characteristics of his planned campaign Rhys lays out where he will go and what will happen. See that HERE.

From there he looks at the contents of the excellent value Patrol Angis game pack which gives you all you need to begin playing in one box. This article is HERE and he talks about the contents of the game pack and then shows off his own painted set of Prydian Army and Yordists. Infantry, Portable Weapon with Gunners, Personalities and Battlesuits as well as the unique Knight Errant which you get only in the game pack. I give one picture here but there are many more in the blog post. 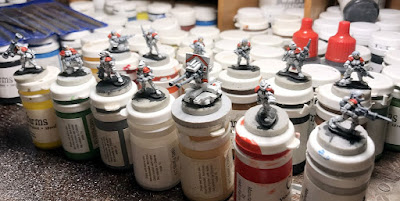 Prydian Intelligence Services Despatch (P.I.S.D.). Outpost Ajax has recently received re-enforcements to its expeditionary force pool. The re-enforcements consist of a detached unit of female retained knights with Angis rifles as well as heavy weapons support. In addition to this, an Espaten weapons platform has also been in-loaded with its specially trained Retained Knight crew of 2. These re-enforcements are a welcome addition to the Prydian force pool. This blog post speaks of the battle on Hertford Prime starting to heat up as reinforcements arrive from off world to join the campaign. Go HERE. An Espaten Portable Weapon Platform and a pack of Female Retained Knights. Have a gander and read on. 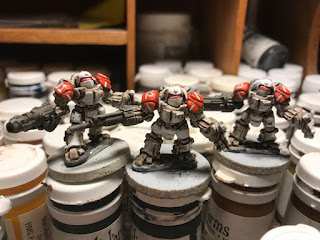 The most recent Ion Age posting on the Great Space Opera Blog is about one of our most favoured codes in the 15mm range; the Duxis Battlesuit. Deciding that the Prydian Army on Hertford Prime needed more muscle to take on the Marcher Baron threat three of the machines are now in the red and white. Go HERE. The campaign is starting to take off now and I am sure in 2018 there will be the rattle of Angis fire as the Throne attempts to take the world back for the forces of good

Keep an eye on The Great Space Opera Blog. I am enjoying the build up to the campaign taking place. If I were to guess on where Rhys will go next in terms of expanding his forces it would be in the area of bikes. The Burgeon Grav Bike gives Retained Knights a lot of mobility and fits right in with the open world and skirmish level of play which is going on.

Where ever you are in the world..or indeed in the universe a happy holiday season to you from all of us here!