“Legion are bad enough. Let me beat on Maligs all year along instead of Legion. But those Pioneers they are way worse. They might not have those rigs the Nox have but those plates can still deflect a burst of Moth Rifle fire with no problems. I remember one time with the 658th a few months back. We were in this place, must have been a zero ball stadium or something, big and oval shaped with stripped out seats. They even had a burned out Happy Burger shack. Shame that, I used to enjoyed that gloop. Anyway there we were all set up nice and ready. No Anvils, Bodkins or Rons with us but command figured we had the Moth Type 12's with those 40mm grenades and our rifle rounds would be plenty. After all we had seen the six Tesserans coming down the bust up Rubbacrete strip towards us and we were just waiting. Fixed on the entry tunnel levelled barrels.

In they came. I saw the green suits, Medusa Legion, just for a moment before the comms signal to fire came. We opened up with everything and I watched the entry tunnel turn to powder and flame. Three seconds and we ceased. I expected green mist and nothing twitching but that ain't what happened, not at all. Turns out those alien scum bags had put in two Tesserans of Pioneers first and they had just sat down wrapped in those damn armour plates when we rained on them. Sure we dropped a couple of them but at that range and without AP it wasn't enough. As we reloaded they stood up and gave us a kiss back with a dozen Flora pattern grenaders. I lost some mates that day.

As I said Legion are bad enough but the Pioneers....screw that...that's a job for those shiny Retained lads!”
Majoris Killian Jones, Camarthen Prime, 4331IC 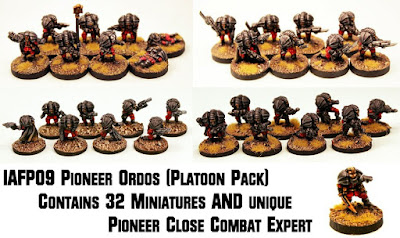 On our website at the end of last week and now with its actual release news we present all of our releases for February 2017.  Two new 15mm Khanate packs and a new platoon pack with an extra free unique miniature.  All building towards the next Patrol Angis book called The Khanate Return. Check out our blog article HERE to read all about the ideas and concepts going on with this title. Here are the details of the new releases and remember you get IMP42 Commander Gongji free in every order, worth 0.60GBP, automatically as well as your Reward Points on your account with us. Go HERE or read on for more.

IAF124 Legion 3rd Pioneers
This month the Shia Khan Empire expands again with a third code of 15mm Legion Pioneers in their distinctive Segmentum armour plates. This code contains eight new white metal poses composed of an Ordo (officer) in cloak armed with a Cupid 0.5Kw Pistol and Juno 2.0Kw Laser Rifle and seven different Discens (privates) armed with the Juno 2Kw Laser Rifle. Your core rifle squad. The suit worn by Pioneers lacks the reactive glimmer of Legionaries but has the same auto-aid ability and breather function plus the protection of the Segmentum armour plates. As always this code can be bought as a pack or as single miniatures or select the three packs and save 10% option on the page. Go HERE. Price 4.00GBP per pack.

IAF125 Legion 4th Pioneers
This month the command for the Khanate Pioneers is released.  A code of eight 15mm Legion Pioneers in their distinctive Segmentum armour plates. White metal poses composed of senior officers, comms, banner bearer, medic and casualties too. Your command and personalities squad. The suit worn by Pioneers lacks the reactive glimmer of Legionaries but has the same auto-aid ability and breather function plus the protection of the Segmentum armour plates. As always this code can be bought as a pack or as single miniatures or select the three packs and save 10% option on the page. Go HERE. Price 4.00GBP per pack. 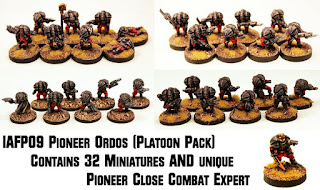 IAFP09 Pioneer Ordos Platoon Pack (with unique miniature)
This platoon pack contains a full Ordos of miniatures as well as an additional free unique miniature found only in this code.  An Ordos of thirty two Pioneer type Legionaries composed of four Tesserans of eight Segmentum armour clad Legionaries plus one Pioneer melee expert with powered sword.  A full force for your wargaming table.  This platoon pack is composed of the following packs:  IAF012 Pioneers 1st Tesseran (Maia Mpis), IAF019 Pioneers 2nd Tesseran (Flora Grenade Guns), IAF124 Pioneer 3rd Tesseran (Juno Rifles) and IAF125 Pioneer 4th Tesseran (Command and Casualties).  Lastly the melee expert Pioneer. The Legions of the Shia Khan Empire are the main fighting force of the Empire. Legionaries are their core who command themselves and oversee the hordes of Malig Space Goblins and instruct the hulking Warlords too.  Organised into standard Tesserans (8 Troops) and Ordos (32 Troops) they are a flexible and effective fighting force.  Legionaries are respected by the Retained, equals of the Muster and feared by the Planetary Militia. This code comprises thirty three different poses of 15mm scale white metal miniatures.  You have the option of purchasing a pack or three packs with a 10% saving applied on screen. Supplied Unpainted and without Bases.  Go HERE  16.00GBP 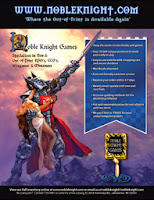 Noble Knight Games
Our North American Agent carries all of our products in all scales along with a lot of products from us and Alternative Armies too. This includes our entire 28mm and 15mm lines. So if you already use this great company or you want to since you are in the USA or Canada you can get your Ion Age products there. Browse from the main page link to all of our products on NKG. Go HERE.

Information Burst
The Xin have their month on our calendar and so we welcome the 42nd free monthly 15mm miniature and month of our little space opera setting.  Commander Gongji is free in every order every time all month before being retired. This miniature is automatically put into every order at the rate of one per order regardless of order value. It can also be bought in any amount on the monthly IMP page of the website for this month only too before being withdrawn on the first of next month. We are into Year Four now and if you missed it you can see the Year Three Collection on the website.  This month's miniature is a superb character by Sam Croes.  Standing 17mm to the eye line it is a heroic officer for your Xin forces at the platoon or squad level.  Armed with a powered sword.  There is a growing page on the Ion Age website where the current and all former IMP series free miniatures are shown so that you can see what came before. Enjoy looking at what came before.  This miniature is worth 0.60GBP. Go HERE.