Welcome to March!  This month the space opera awesome of The Ion Age is making a great offer to wargamers who fancy checking out our 15mm rule system with fifty percent off the three book bundle for Patrol Angis.  Get all three books as digital downloads in one place and see just how war works in the far future of the Prydian Precinct.  Go HERE to see the bundle.  As well as this we have a new release this month which is replacing its original version; much like the Mullo AFV and Mullo APC this time it is the Skylark Flyer.  We will have more on this during the month but if you have any questions do please contact us on info@theionage.com. 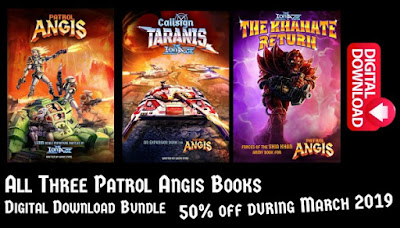 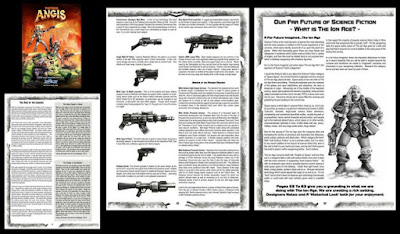 In the bundle you get the core book Patrol Angis which concerns itself with small scale infantry and battlesuit warfare, you get Callsign Taranis which brings in bigger games as well as all kinds of larger vehicles and you get The Khanate Return which is a campaign book giving you army lists and setting for the alien menace facing the Prydian Precinct.  There is a lot more to read and to see (pages from the books) on the website than can be put here so please click through on the links and read more.  Plus Patrol Angis is designed to be played solo as well as with other players.  The bundle HERE is a total of 192 pages of rules, background, setting, force creation and much else besides.  You can use your Reward Points as normal for further discount. 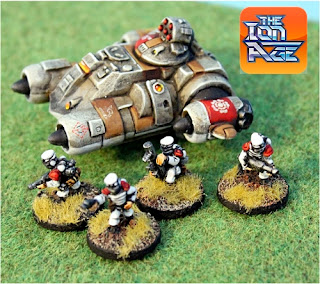 “Since before the outbreak of the Prydian Civil War the various marks of the Type 41 Skylark Patrol Flyers have been part of the Muster regiments of the Precinct. Based on a designed from the era of the Ban of Prejudice the Type 41 was put into renewed mass production on seven worlds before the Battle of Fenway Prime. While the Adder Combat Car fulfils the needed role of a multi propulsion ground transport for Muster Platoons there was a need for an armed transport that could move in three dimensions. The Skylark fulfils this role well with the objective of moving troops from a staging area to the combat zone with no intervening stages. Capable of dramatic bursts of speed with its four jet engines the howl of an incoming Skylark is common to the ears of friend and foe alike. The Type 41 was given the name Skylark during its testing on New Glastonbury with a hint of humour. That species of ancient Terran bird was brought to New Glastonbury during its long ago original colonisation and its swooping grace is very much at odds with a vehicle that puts ascetics well behind protecting itself and its occupants....”

As mentioned earlier the IAF029 Skylark Patrol Flyer is no more.  The model is withdrawn from sale and is retired.  But do not fret IonFans!  The 'lark will return in a new expanded version of the code this spring with many new options.  It will be still the same code and the same vehicle in the game but with options.  Those who have one or more of the now extinct version one are part of a club now as there shall be no more. See this blog post from March 2014 HERE for more information on the three codes in the Skylark series.  You can find rules for the Skylark in Callsign Taranis.  Watch this space!