Percival Sparkletrout mixes it up with Battlesuit conversion

I was delighted to see the end result of a great conversion process that 15mm science fiction wargaming fan Percival Sparkletrout showed off two weeks ago and he kindly gave permission for us to share the results on our blog too. What does happen with you take the arms and tri-barrel gun of the Jade Ape Battlesuit and mount them on the body of a Steornede Battlesuit? Now we know. It is awesome! 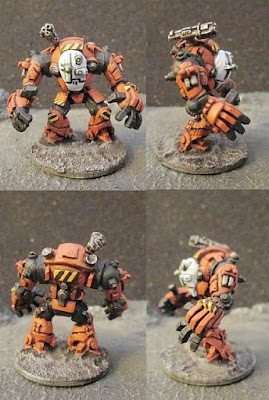 Painted up in a fetching deep orange and black scheme with hazard stripes and a white pilots front hatch the conversion looks menacing with its long arms and hands rather than the typical twin cannons or twin missile pods. The idea was a battlesuit as an armoured and armed power loader (part fighter part factory worker) so that the civilian population had some muscle when the Shia Khan or any other Xenos invade their cities. I was told that a little modelling was required for the conversion but it was not a lot. Some carving to widen the sockets for the arms into the resin body of the Steornede and the drilling of a small hole into the top of the battlesuit to mount the three barrelled gun. It has occurred to myself and others that you could do this conversion the other way around and take the body of the Jade Ape Battlesuit and mount the twin Anda Missile Pods or twin Moth Cannons onto it from the Steornede kit. I have not seen this but I have tried it loosely with the parts and it looks good and works well.

IAF118 Jade Ape Battlesuit
The Sanbao or Trade Fleet Soldiers of the Xin Hegemony operate Battlesuits in fire-teams of three or singly. This pack contains one multiple part 15mm white metal and resin battlesuit miniature. The Guaiwu II or 'Jade Ape' has twin duties of battle and cargo handling with massive upper body strength. It has a shoulder mounted three barrelled heavy Gonglu support blaster. A big brother for your Sanbao trade fleet soldiers. The miniature is supplied in four pieces and is easy to assemble. The arms may be mounted in varied poses, low, medium or high. Assembled the miniature is 35mm tall to top of body. See it HERE. 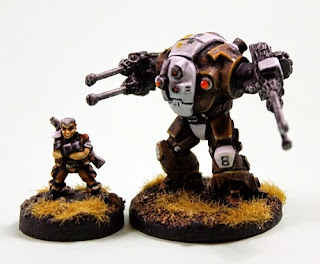 IAF072 Steornede Battlesuit
The defence forces of the Prydian Precinct have their own battlesuit to put them on an equal footing with those who would invade or insurrection their homes. The Steornede is that battlesuit in two variants. This code comprises a highly detailed 15mm scale miniature which is approx 30mm tall supplied as a one piece resin body and two separate white metal arms mounting Anda 60mm missile pods (IAF072A) or Moth 88 Cannons (IAF072B). Suitable for use in many different settings it is excellent back up for your infantry. See it HERE. 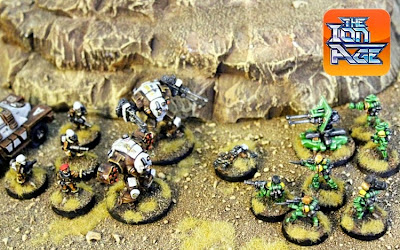 If you enjoyed this conversion article and would like to try out your own conversions of these battlesuits then you can! If you place an order which includes either of these battlesuits in any quantity and you wish to get different arms just send an email to info@theionage.com titled with your order number and tell us which arms you would like with the battlesuit you ordered. The Arms of the Jade Ape, the Twin Cannons or the Twin Missile Pods. We will then supply the chosen arms with the ordered battlesuit at no extra cost. We would enjoy seeing the painted results too!

We will make our last release of the month later this week. The whole platoon of Muster Patrol including the new all female squad and extra free unique miniature in the platoon pack. Watch out for this!