“The Shia Khan Empire is, despite its ancient age and mighty power, not a sophisticated enemy on most battlefields.  It is surmised that this and their apparent lack of interest in the value of life is down simply to having such endless resources at their disposal.  Able to throw the lives of their soldiers away without care they can just send more to the flesh grinder of war. So the presence of robots in the ranks of the Legions was a surprise to Prydian commanders.  A most unwelcome surprise as it became clear that the purpose of the robots was to inspire terror in and then exterminate Humans.

Dubbed Psycoborgs due to their appearance, some two to three times the height of a Human and man-like in construction. Their heads being like a skull and one arm mounting a support grade weapon they also could quite literally inspire terror.  An unknown technology radiates from each robot and makes concentration and bravery exceptionally hard for regular troops and challenging even for Retained Knights. Psycoborgs operate either as single hunters in low intensity combat zones also aiding the conversion of Human Betrayers or as small groups typically of three robots within a platoon.  Betrayers never act alongside these robots and Maligs rarely to do so.  Legionaries and others seem unconcerned by their terror inspiring abilities.  They are incapable of command and are given their programme by their commander in the field.  These are the Psycoborg Robots and they are a fearsome foe!”
Taken from – IAB03 The Khanate Return Army Book 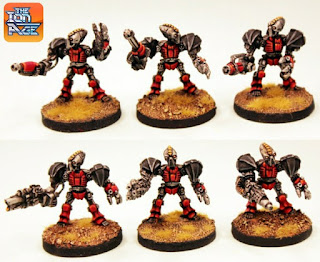 The Ion Age makes its last release for the month of May 2017 with the arrival of six variants of the long awaited robotic terror machine of the Shia Khan Empire; the Psycoborg!  You can go straight to the new pack HERE or read on for more information about these robots as well as how they fit into the new Khanate Army Book as well as some lovely pictures including a line of of all Khanate figure types and our monthly deal and free figure for May...all Khanate!

IAF134 Psycoborgs
This pack contains the parts to make up six variants of the terror robots in the service of the Shia Khan Empire the loathed Psycoborgs.  Each white metal kit is composed of a body, a head (which can be posed) plus a fist arm (which can be posed) and a gun arm (which can be posed).  Assembled the 15mm scale robot stands approx 30mm tall putting it into the same region as a Khanate Warlord.  As well as the pack option plus an option for three packs saving ten percent you can also choose to purchase a single random Psycoborg kit (contact us with your order number if you would like a specific weapon arm included).  Supplied unpainted and unassembled and without bases (shown on 30mm round bases as per Patrol Angis rules). 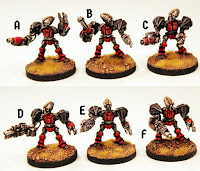 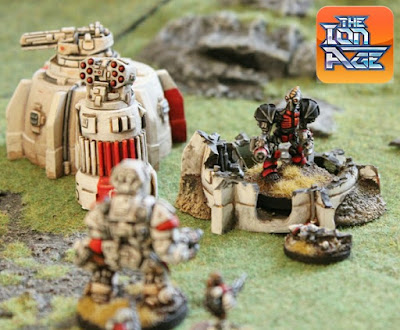 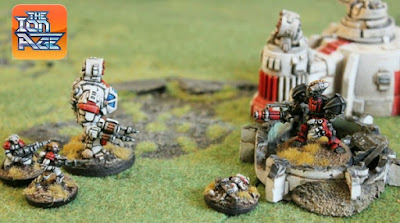 Psycoborgs typically act alone or in threes in larger battles.  Behind the lines and in urban areas they stalk the darkness seeking out weakness.  Small strike teams are sent out to find and destroy the robots before they can do more damage.

We thought it would be nice to show you a scaling line up of all the 15mm troop types currently in the Khanate army.  From left to right they are:  Malig, Legionary, Pioneer, Nox, Warlord and Psycoborg.

We have a month long special offer...to go with your super heavy lads for the Shia Khan we have 25% off IAF039 Khanate Warlords both the pack and the single miniatures from it.  The discount is online and all you need do is add to cart, reward points are as normal and can be used on this offer too.  Offer ends 1st June.

You can assemble a whole Legion's worth of infantry for the Shia Khan Empire using the 15mm range now from Legionaries to Pioneers as well as Nox and Maligs as well as portable weapons and Warlords; now Psycoborgs.  While almost all Legionaries have their helmets on there are both male and female aliens in the Legion so this month we give you a useful miniature to add to any Tesseran or Ordos.  IMP45 Female Khanate Legionary.   Free in every order every time all month before being retired. This miniature is automatically put into every order at the rate of one per order regardless of order value. It can also be bought in any amount on the monthly IMP page of the website for this month only too before being withdrawn on the first of next month. Standing 17mm to the eye line our female Legionary is tall like all elvish Legionaries.  Bare headed, helmet under her arm and sporting a Maia Mpi she is useful in any Khanate force. This miniature is worth 0.60GBP.