The Khanate Return book in April plus details and first look at pages!

Not long now until the early supporter offers for the third book in the Patrol Angis series. In April 2017 the team at The Ion Age will add The Khanate Return to the core book Patrol Angis and vehicle expansion book Callsign Taranis. After we announced the third book we saw a big uptake on the current titles and in fact they have both sold out! We will have them back in stock as well as the new book next month. In this blog post I want to show you a couple of pages from the new book and to give you a run down of what our offers will be and when they will hit the website. Click on each image to see them much, much larger. 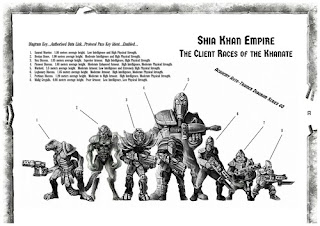 I have chosen as the first page to show you the client races of the Khanate Empire which is a page I am sure will be a popular one indeed. When I began writing the new book I knew right from the start that I wanted this line up to appear. The Shia Khan are enigmatic indeed and so much so that no one really knows what they look like and while the Khans themselves are still a mystery the troop of the Prydian Precinct have a firm idea of their soldiers. Drawn by Sam Croes the line up gives you the 'slave races' which form the Legions that are the primary fighting instrument of the Empire. You will be familiar with some of these not least those to the centre including the Legionary, Pioneer, Nox and Malig but others may not be so obvious. From left to right and accurately presented in relative heights to each other are: Saurad Warrior, Beotan Brave, Nox Discens, Pioneers Discens, Warlord, Legionary Discens, Pertinax Discens and a Malig Gregalis. It is our intent to make miniatures for all of these over time and details for each are in the book. Awesome! 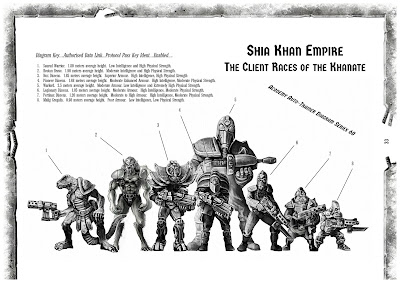 The second page I chose to show you is a typical page from the army section, one of two, in The Khanate Return book. It is the opening page of the Shia Khan Army Organisation section (there is also a Planetary Militia section) and it gives a short account of the beginning of the Camarthen Campaign (which is covered in great detail in the book) as well as information on how to proceed. On the pages that follow are the accounts of each of the client races, the organisation of Tesserans and Ordos as well as the statistics tables for armour, weapons, formations, vehicles of all sizes written by myself. All ready to be locked into Patrol Angis for skirmish games and Callsign Taranis for larger games. An Army Book fit for any alien invaders! 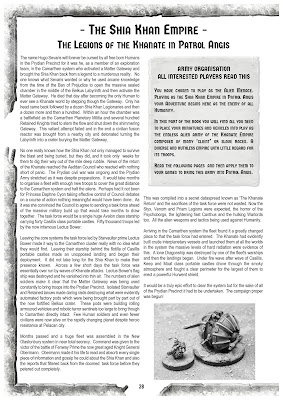 The Early Supporter Offers will be as follows for the new book first in print then as digital download. On Friday 14th April 2017 we will begin our Salute Season offers and from the 14th to the 24th April we will have free postage on all orders over 15GBP worldwide and you can pre-order The Khanate Return with a free Malig Orba Bike worth 2.00GBP added free plus you will get the April free miniature and Reward Points and have access to the month's 25% off offer too. There will be a new triple book bundle too with a saving so you can get all three Patrol Angis titles in one go. After the 24th we will ship out all orders which DO NOT contain the book. We will then ship worldwide all orders containing the new book from the 8th May 2017. The 8th of May will also be the day which the paid digital download version of the The Khanate Return will go on sale along with a new triple bundle of all three books in PDF format these will be 20% less than print version as always. Roll on the 14th! 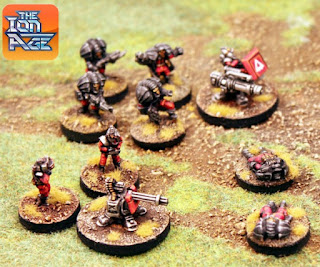 In April we will be giving you a free monthly miniature which is total mad fun and goes well with the vicious two legged feathered creatures that are the month's miniature release too. So it will be all alien and all strange for all of April....not long to wait now. Thank you for your support and for making my space opera dream an ever larger reality in miniature.