“While the variant Purple Adder acts as a sapper vehicle in low intensity theatres and the rarer Taranis Type 103 'Big Blade' which does the same work in high intensity war zones there are many clearing tasks which must be given to infantry due to urban environment or logistical shortages for instance.  In these instances special allocation 'Cutter' troopers are deployed.  Muster Special Clearance or SC Troopers are nicknamed 'Cutter' due to the use of the exotic Valerin 11Kw Cutting Laser rig.  This weighty device limits personal mobility and can be used as an offensive weapon but its primary use is in the clearing of debris, walls and natural flora such as trees.  Unlike other Valerin laser weapons that deliver a very short lived pulse of lethal long ranged energy as a beam the Cutting Rig operates over a very short distance with sustained beams that are swept back and forth in front of the wearer.  This beam can slice through and burn down anything from wood through to re-enforced Rubbacrete allowing the wearer to cut themselves a precision path wide enough for two or three people to walk abreast along through almost anything given time.  The Cutting Rig is also used to prepare areas for building and for fortification as well as carving out landing grounds in thick jungle for instance.  There are recorded reports of 'Cutters' in desperation taking on Havelock Battlesuits and even larger targets at little more than arms length.”
Academy Auto-Trainer Series 26, New Glastonbury, 4326IC

Its the start of the new campaign season for the year and as we approach autumn once more I want to welcome you to September 2015 at The Ion Age.  We present to you the first of the third year of our operation free monthly miniatures IMP25 Muster Cutter Trooper.  For the whole of September this 15mm miniature is automatically put into every order at the rate of one per order regardless of order value.  It can also be bought in any amount on the monthly IMP page of the website for this month only too before being withdrawn on the first of next month.

There are diverse branches of service in the Muster from The Infantry who make up the bulk of troopers to Artillery who man the big guns and Patrol who do the recon as well as Fleet and Fortress who are in space and responsible for the vehicles of the regiments of both the Prydian Army and the Marcher Barons.  A trooper who is designated a 'Cutter' can belong to any branch of service but they are most common in Infantry and Fortress as these two branches often need to get to places that are tough to reach.  Dressed in standard uniform and carrying the heavy industrial clearing Valerin 11kw Cutter this trooper is in one piece and stands approx 15mm tall.  A great miniature for your Platoons and collection with an exotic weapon / tool. 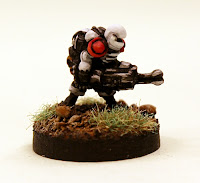 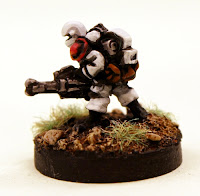 We look back at what was going out free this time last year and now also in our first year too.  In September 2014 it was IMP13 Alouten Veteran and in September 2013 it was IMP01 Retained Knight Kneeling.  You can get them in the Year Collections of formally free on our website HERE but if you click on the links over the codes you can see the blog post from that month and year and see what else we were up to.

August was a hot and sunny month that saw us releasing the hot rod of light vehicles the IAF080 SuperBlue Adder and the all female IAF076 Retained Lance Command Charlie both of which surprised us with the anticipation that IonFan's had for them.  The other big news of the last month was the announcement that we are working with the legendary Bob Naismith on our main battle tanks range called Taranis.  This month will see more on that announcement with blog posts showing the fantastic progress made on Taranis as well as two releases mid month that will bring not only command but a platoon pack with unique miniature to the super heavy knights of The Ion Age....