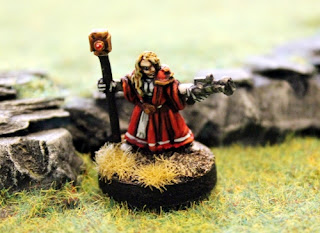 “Unlike those of the Retained who strike out along the path of the Knight Errant and take up the Quests of the Code Gallant it is the way of the Banneret that appeals to those of a more universal mind. With the taking of Tor Banner Oath the way of the Code Gallant is abandoned and instead the instead the staff and discus are worn with the understanding of a seeker of truths. Bannerets can be found at many levels within a Retained Regiment and also in the other arms of the Prydian Army such as the fleet and the myriad aboard the New Glastonbury Tor. They have the same training and zeal for their soldiering that other knights do but their overarching mission, much like the Knights Errant, lays elsewhere than on the battlefield. While the Errant seeks the Quest the Banneret seeks the Truth. Throughout the Precinct is evidence of ancient ways and even older denizens of the galaxy whose way of life is long gone but their imprints remain. These imprints are upon objects, upon places, upon worlds. It is the task of a Banneret to use the staff and cowl to follow an imprint where ever it might lead and what ever it might be. Among their favoured weapons are the Carwennan Mini-Mine Handgun and the Energy Discus as well as a powered mace. The staff is the mark of the Banneret who has Tor Banner Oath.”
Academy Auto-Trainer Series 26, New Glastonbury, 4326IC 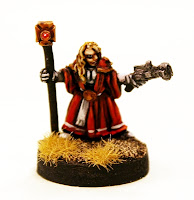 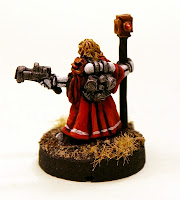 Ain't she just a beauty! Sculpted by Sam Croes our lead designer at The Ion Age the brand new 15mm Female Banneret is due for release later this summer as part of a whole female command pack of five different poses. This will be IAF076 Retained Lance Command Charlie. Dressed in robes around her Alwite Powered Armour in one hand she has the Staff of the Banneret and in the other the lethal Carwennan Mini-Mine hand gun. She stands 17mm tall and is a one piece white metal casting.

Bannerets can be used as normal command miniatures in Patrol Angis and indeed they should be. However they can also be named characters with a profile and story too. Place in charge of your Post (10 miniatures) or your Lance (22 Miniatures) or an even bigger force if you are playing with three or four platoons a side as we are in our testing of new rules.

You can find the other Banneret in the range in IAF004 Retained Lance Command Alpha (pose 5). That miniature is male also in robes with a staff but instead of a pistol he has an energy discus which is a rare and odd weapon indeed. Go HERE for that pack.

Look out for this lady and her four companions later this summer!