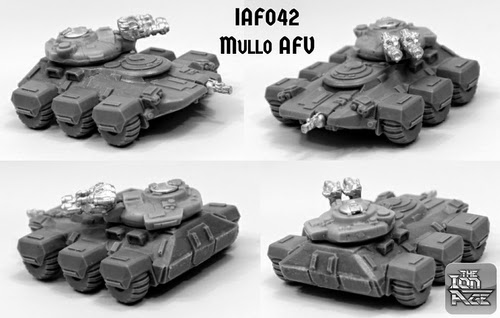 The Ion Age is entering the realm of medium sized ground vehicles in 15mm scale this month. This sneak peek shows you some images of the mighty Mullo Armoured Fighting Vehicle which will be the subject of an Early Support Offer (ESO) real soon. The Early Supporter Offer will start on the 18th September 2014 and run until 30th September 2014. Full details will be in the ESO post so look out for it!

Designed by Sam Croes the Mullo is a resin and white metal vehicle kit which features six large ground tackling wheels along with a turret with twin weapon mount and a centre forward anti-personnel weapon mount. An armoured vehicle that acts in support of the Retained Knights that it serves. It is very much a space opera style vehicle that you can see as the result of a far future military with varied needs. Its very fetching!

Once assembled the Mullo AFV measures some 80mm in length with a width of 70mm and a height to top of turret of 30mm. It is easy to assemble with a one piece hull and pre-set bracketing points for the six wheels to be mounted. The Angis 12.5mm AP weapon on ball mount can be attached to the front of the hull or left off if chosen to. The main turret is one piece with two mounting points for a pair of support grade weapons. Shown here are two Valerin 15Mw Laser Cannons but we will also be offering the Mullo with twin Fretan Rail Guns (the same as those mounted on the Corbal Deployable Hardpoint) if you wish those weapons instead. Any turret mounted weapons from the Adder vehicles and the Corbal will fit the Mullo.

The Mullo Armoured Fighting Vehicle plays a role between the scouting and low intensity roles of the Adder Combat Car and the Skylark Patrol Flyer and the high intensity and fighting the Shia Khan Empire roles of the Taranis Battle Tank and the Brama Heavy Repulsar Platform. While it will not play a part in the core book of Patrol Angis all vehicles will feature in an expansion title. But in the meantime they are excellent for any rules system and of course for adding to your collection.

Full details on the Early Supporter Offers on the 18th September 2014.